my night at the westin hotel

So, my flight to Denver was postponed and ultimately canceled. I was  pretty flustered, especially since my bags seemed to get twenty pounds heavier every hour I had them in tow (Thanks, gravity!), but managed to book a new flight and get shuttled to the nearest hotel to stay for the night. I would have bothered my friends to house me, but the trek back into DC would have required three more hours of lugging my crap all over town and a bunch of guap for transportation, so I opted for the free shuttle to the free hotel room with a $15 food voucher.

As soon as I arrived, I sprawled on my king-sized mattress and flipped on “No Reservations: Sardinia.” Anthony Bourdain proceeded to whet my appetite with flashing images of the most amazing food from the other large island neighboring Italy . If watching a goat being roasted over an open spit wasn’t enough to excite my tummy, the meat-roaster proceeded to engulf a hunk of lardo in flames and let the fat drip onto the goat. Then, I was tortured through watching a lot of people (who were not me) eat an insanely elaborate farm homestead meal, capitalizing on Sardinia’s agriturismo industry. Why, Anthony, why? Regardless, Sardinia is now firmly planted at the top of my list of culinary destinations. I mean, people there carry around special knives in their pocket to facilitate consumption of cured meat and local cheese. That is where I belong. Also, just check out the description of the cuisine on Wikipedia.

Hunger in tow, I moseyed down to the Padella, the hotel bar and restaurant, for some food and perhaps a brew or two. (By the way, whenever I say or think “hotel bar,” the Human League’s “Don’t You Want Me” gets stuck in my head because I always misheard “cocktail bar” as “hotel bar” as a kid.) I had the tomato-basil soup, ravioli with rabbit ragu, and chocolate lava cake. In retrospect, I should have just gone for the burger I was craving because my attempt at exploring new territory didn’t go so well. 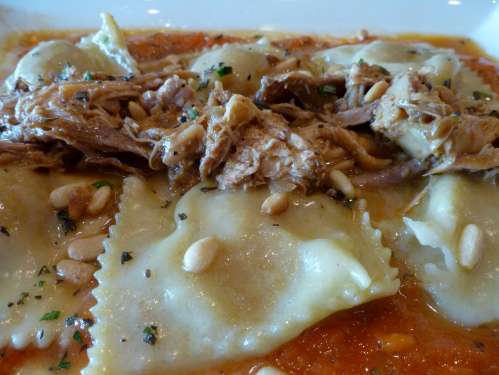 1) I was in the bathroom when my soup arrived and by the time I returned it had cooled off a bit too much. Lukewarm soup ain’t pretty (or delicious).

2)  The ravioli were actually pierogies. Thinking back to the description midway through the meal, I remember reading “smoked potato ravioli,” but for some reason, my mind didn’t make the connection to pierogies upon reading this. I think I spent the majority of time eating the ravioli trying to figure out why the ricotta was much grainier than it was creamy. It was like biting into a sweet pickle when you are expecting  a sour one.

3) The rabbit ragu had a bone in it! Eating rabbit is something I find to be at once troublesome and absolutely not troublesome. Like most animals, rabbits are adorable, so getting over eating the Velveteen Rabbit and Little Bunny Foo-Foo is a little hard for me. But beyond that, they reproduce so quickly and eat vegetarian so I feel like they are quite a sustainable food source. But when I am plowing through a maybe ravioli-maybe pierogi textural battle, the last thing I expected was to find a bone (an unidentifiable one at that) amidst a bunch of connective tissue in the sea of pulled rabbit meat. Blegth.

4) It was clear that the ravioli were old because the pasta at the seams was really dense and chewy. They had dried out a bit too much, either in the refrigerator or freezer, and were an unpleasant mouthful.

5) The chocolate lava cake was absolutely delicious except it was supposed to come topped with ginger ice cream and instead it came with vanilla bean. Screw that! I wanted to reminisce about eating dark chocolate + ginger Green & Black’s bars as a form of caffeination during late night study jams, but no. I was not afforded that moment of nostalgia.

Overall, though, my time bellied up to the Padella bar was great, and the attentive staff and $3 happy hour beers were only the beginning. Most importantly, I sat next to a woman who had been a stewardess nearly half a century ago, and her stories about dating members of the Brooklyn Dodgers and wearing girdles so she “wouldn’t jiggle” made the entire meal go down a lot smoother.

Adams Avenue Farmer’s Market (AAFM) in Normal Heights leaves much booth-volume to be desired. It is a pretty meager excuse for a farmer’s market, covering only one-third of a small parking lot. However, I went because I had a coupon for a free giant artichoke with a $10 purchase from Suncoast Farms. I walked away with two bunches of asparagus and three giant artichokes, and they aren’t kidding. I ate one on the 4th of July with my cuz, and we steamed it with lemon, garlic, rosemary, parsley, and ginger. Twas yummy.

Thai food has somehow managed to stay out of my life for the past few months. After passing a Thai place in La Jolla on Sunday, though, I’ve been craving the stuff like a famished hyena craves gazelle flesh. Cue the afro’ed employee at the Thai food vendor at AAFM, who helped me through my indecisiveness. I ended up getting the chicken and vegetable curry over rice, with ten of these little coconut pancakes. With no tables in sight, I sat at the edge of a slide that I had to give up in the middle of my meal to two frowning, disgruntled children. 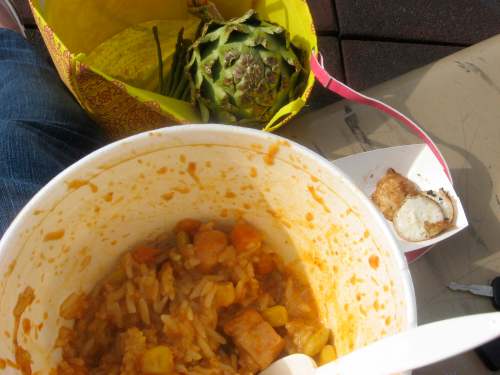 Eating hot things that taste really good is a recipe for esophageal cancer (EC, as I lovingly call it). With no care to the pain of scalding curry sauce running down my throat, I kept eating, wasting no time to blow on my food. It reminded me of an evening last semester when my friends made a tagine with homemade meat balls and fresh bread; those of us who ate it just sat there moaning in pain and satiety. Temperature will not get in the way of experiencing this flavah, no sir.

The curry was all well and good. It had the perfect amount of spiciness after adding some Sriracha and sweet chili sauce (thanks, admayer), which is always key with curry. However, the star of this farmer’s market show was the coconut pancake. Called Kanom Krok, they are a mixture of coconut milk and rice flour cooked in a dimpled cast-iron pan.

I didn’t take this picture (it was found using the Ye Olde Nouveau GoogleImage Search), but it depicts what I’m trying to say:

The last time I saw one of these pans was on an episode of Anthony Bourdain’s No Reservations where he went to a restaurant that allowed customers to make their own octopus meatballs. Mmmmmmm. But at the AAFM, my afro’ed friend let me try a sample of these pancakes and I was hooked. The middle is soft, gooey and warm but the outside is a crunchy and little charred from the seasoned cast-iron pan. It has unbeatable mouthfeel and a sweet but mild coconut flavor. I want to eat these at all times. I want to douse them in honey. I want to chop them up and eat them with strawberries. I want to spread peanut butter on one, blackberry jam on the other, and smush them together for a tiny PB&J. I want to buy my own dimpled cast-iron pan so I can make them for breakfast and serve them to passersby on my way to work. I have no idea where to buy one so if you do, help me so I can help others.